Remember this guy? The golden Kim Il Sung? He was where I left the discussion last time.

He is on one of the 3 decorated stations in the Pyongyang metro that we visited, larger than life and twice as golden. I want you to keep him in mind when we revisit the metro later in this post.  He isn’t the only item in the station I want to show you.

Last time we were talking about how The DPRK regime has clearly observed the power of advertising in the capitalist West and has used some of the tricks that work so well in the West, to instead endear themselves and their government to the North Korean population. Pictures and other visuals were a key component in gaining and then holding power.

As I’ve written about elsewhere, when Kim Il Sung came back to North Korea after WWII, North Korea had around 2.5 million illiterate people. Not surprisingly, there was a huge push for education. In 1946 the first University was built and in 1953 compulsory primary schooling was introduced. In the meantime, it makes sense that painting, murals and other visual arts would be crucial in gaining the largely illiterate population’s support for the new government and its programs.

This reliance on visual aids is still heavily used to this day.

These two photographs (with the helpful English subtitles) were in the foyer of the 6-star hotel that we stayed in when we went into the country. Whenever any of the leaders visited a factory, school, mine or farm, photographers were clearly on hand to document the visit, with the photos and captions proudly displayed for evermore.

Do you notice the phrasing of the captions? It was always the same – the leaders were not just touring and observing… they were always giving “on-site guidance” because their knowledge is deeper and more intuitive than anyone else’s.

Notice too, how Kim Jong Un is smiling and others around are laughing. By all accounts, he’s a very funny man and when we were in North Korea we saw many photos of him looking like he was full of warmth and good cheer. But in the West, it’s rare we see any photos of him cracking a grin. 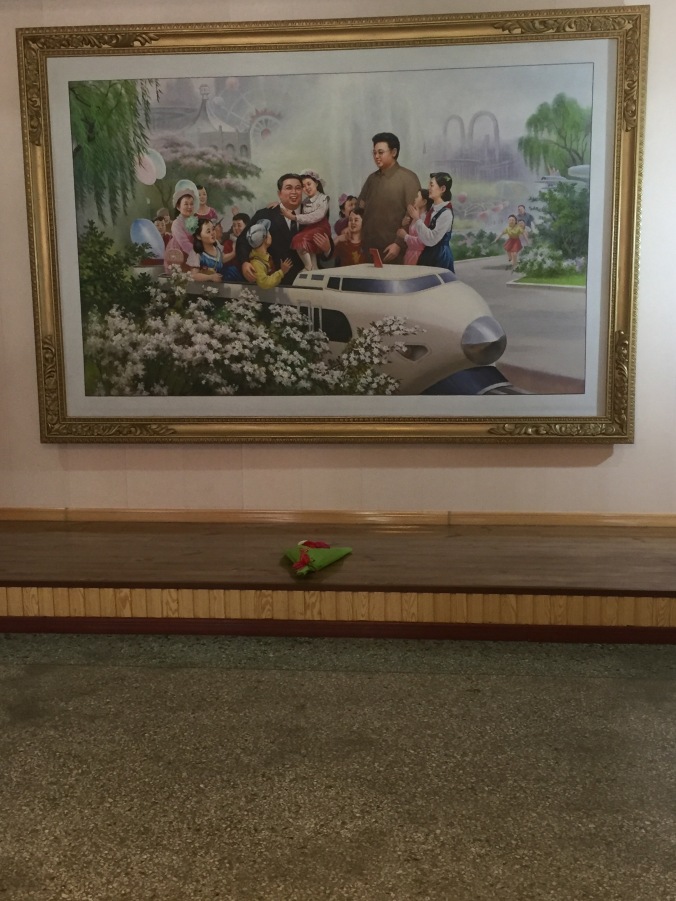 Photos aren’t the only images that are used. In every foyer, whether it be a school, a hotel or a public building, there are massive paintings of at least one of the older 2 leaders. This one was in the foyer of the primary school in Pyongsong that we toured. Kim Il Sung is surrounded by happy children, Kim Jong Il is over to the side looking adoringly at his father, while the children are in an idyllic place, with more children rushing to join them. They are shown literally hanging off the two leaders, as metaphors for the Korean people as a whole, being supported and uplifted by these two Great Men.

See the bouquet of flowers at the foot of the painting? They were fresh flowers, and I’d bet my bottom dollar that there’s a fresh bouquet brought there every day, probably by the families of the students. If I was running the school I’d have the flowers brought on a roster, with each family’s child/ren having the honour of bowing and laying the flowers down in front of the portrait. Nothing like teaching them young!

This portrait of Kim Il Sung is in the foyer of the Grand People’s Study House, which was built to honour him on his 70th birthday. It was probably one of the biggest paintings we saw and I regret that I didn’t have a person in the frame to show you how large it is.

Mt Paektu in the distance, which is the most sacred mountain in the Korean peninsula for both North and South Koreans, the pine forest behind him with its positive ions and the blossoms of the foliage with its renewal and growth after the hard times of winter. Everywhere the North Koreans go, they see paintings like this all around them. They are steeped in the mystique of Kim Il Sung, in particular. 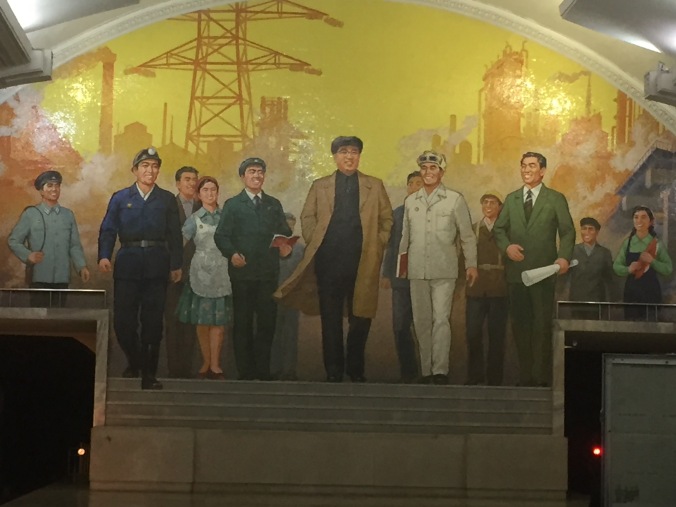 And here we are down in the metro again. This is at the very end of Puhung Station. See the shine? This isn’t a painting – it’s a mosaic made up of very tiny tiles, entitled ‘The Great Leader Kim Il-Sung Among Workers’. This is one of many mosaics that decorate the walls of these stations. They are all incredibly nationalistic in style, usually with political images of the leaders and the workers, but sometimes with views of Pyongyang itself and of vistas showcasing Korea’s natural beauty.

Actually, when you walk up to get a closer view, you can’t help but notice that Kim Il Sung’s face has far more detail than the others’ faces. 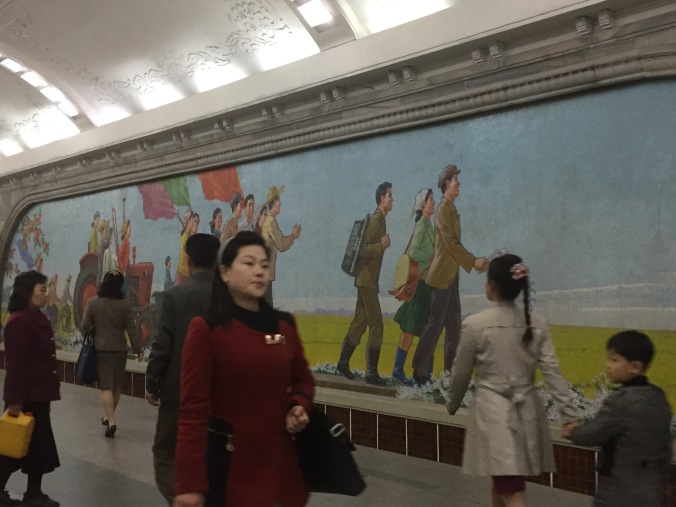 These mosaics run the whole length of the stations. They must have taken ages to plan and complete.

The next two photos are portions of the mosaics that run either side to the big gold statue of Kim Il Sung that is at the beginning of this post. Running for at least 30 feet alongside both platforms, these mosaics feature workers and citizens from all walks of life joyously celebrating the glory that is Kim Il Sung.

There’d be at least a hundred different figures all facing the statue, with their flags, signs and ecstatic expressions showing just how incredible their leader is. No matter where a commuter looks, there’s the evidence of how fortunate and blessed he or she is. 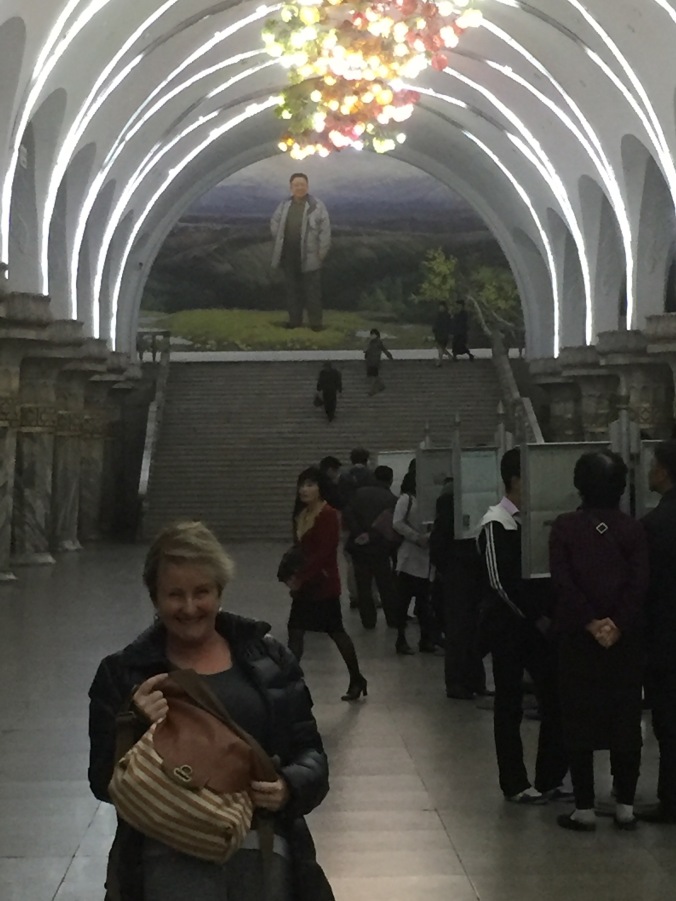 I’m sure by now you recognise the mountain behind Kim Jong Il! He’s standing in the worker’s parka that he wore in public in winter for the last decade or so of his life. Underneath that, he’s wearing the khaki uniform that again, he always wore in public to show that he was always working for the people and so didn’t have the time or the inclination to waste on dressing in expensive suits. (Sadly, in private it was another story. But the North Korean people haven’t an inkling of it.)

The lights in this station are meant to look like fireworks, celebrating all that he has done for and sacrificed for the country. Notice the newspapers in frames so the commuters can see what’s going on? When the people left and we were the only ones on the platform, we asked Mr Kim, one of our guides, what things were being reported on. The big news of the day was that it was the 30th anniversary of Kim Jong Il being appointed the head of some committee or other. Later on that day we saw women dancing in their national costumes in celebration of this. 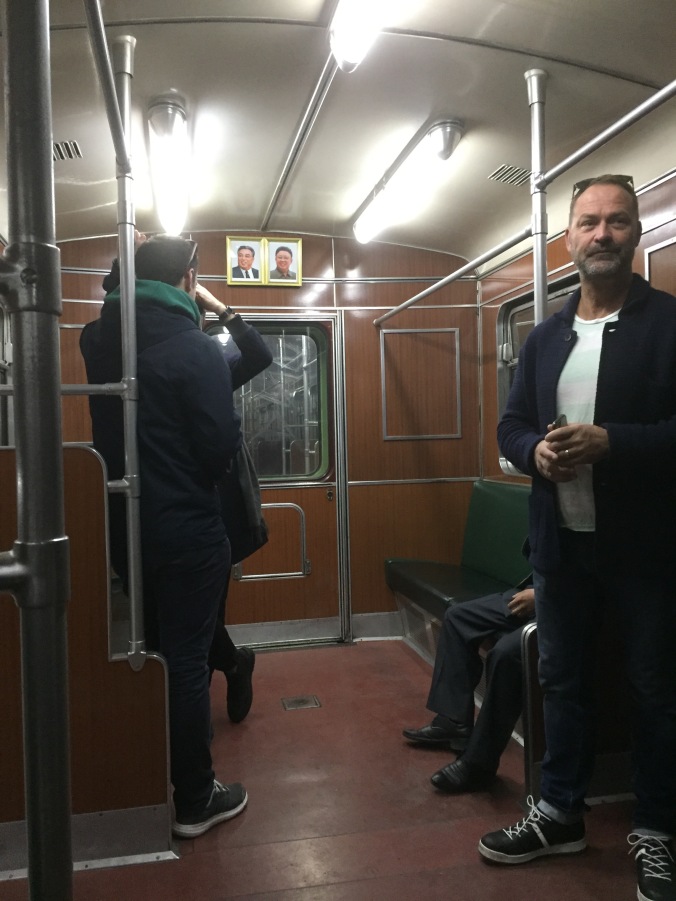 But BY FAR the most important images are these two. Every single house has them. Every single classroom, office, business, restaurant, factory … even, to my surprise, every single train carriage. No matter where a North Korean goes, these two faces are above them. These are the only shots used, so they are as familiar as the back of your own hand.

Every house is expected to have these hung up in the main living area. They are to be kept clean and dusted, and woe betide you if one gets broken. We were only in the DPRK for 10 days and even in that short space of time, we saw these faces so often that they became utterly familiar.

“Ah, there’s our mates!” we’d say as we walked under them. How much more powerful must it be if you were born under these faces and literally grew up under them all your life?

Here they are in the English classroom that I taught in at the Grand People’s Study House. They’re almost as big as me!

One morning towards the end of our tour, we went for a walk around central Pyongyang. By this stage, I had become very blasé about the pictures and signs, but I liked this one. It’s rare to see a woman featured at the forefront of a battle scene. This was one of a series of images on the side of the State Theatre.

Dotted in and around Pyongyang and other cities were billboards like these. They were everywhere, usually with cheering, victorious soldiers, but I particularly liked this one with the nuclear missiles flying up above the cheering population. I don’t know what the words below mean.

Every time you walk down the street, you are surrounded by images like this, or of the national flag. 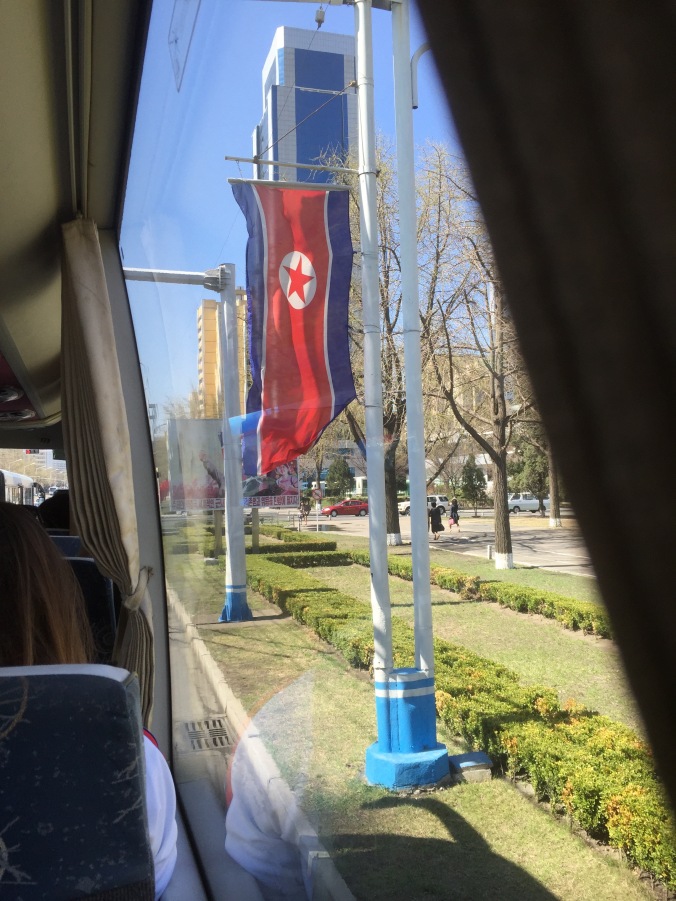 Speaking of which, here it is.

It’s a clever design, with strong colours, (ironically the same red white and blue of the hated American Aggressors… and our flag too, come to think of it!), and it looks very effective when you see a whole heap of them in a line or grouped together on a street corner. The red star in the centre is placed everywhere. We noticed it a lot at the DMZ.

On our walk through Pyongyang, I decided to ask Un Ha, our other North Korean guide, what a couple of the signs were saying.  I couldn’t quite remember the exact wording, but I’ve got it down in my book as being something about the constant fight for reunification with South Korea and how they will never give up. 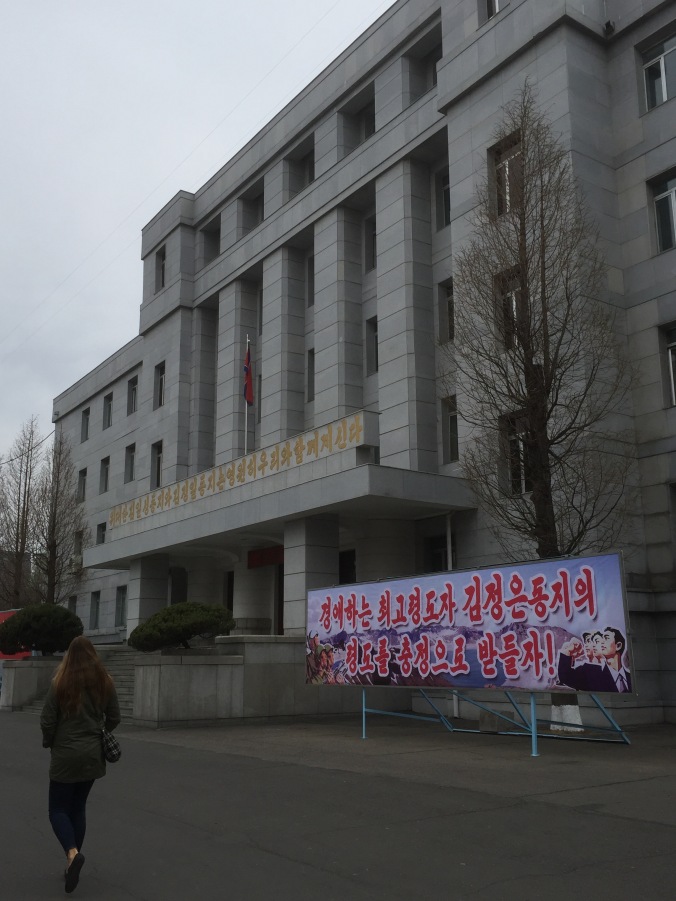 Aha! Another sign! I asked Un Ha what it was saying.

“We promise to uphold the leadership of Marshal Kim Jong Un with the utmost loyalty.”

It makes you wonder.

Here is a population being groomed to adore their government above all else, while we’re being groomed to believe that KFC is finger-lickin’ good, that Red Bull gives you wings, and that maybe she’s born with it – or maybe it’s Maybelline.

There’s more I want to show you. Advertising is incredibly powerful.

7 thoughts on “Advertising – North Korean Style (2): Where a picture says a thousand words.”

This site uses Akismet to reduce spam. Learn how your comment data is processed.